The War on Women in Israel: A Story of Religious Radicalism and the Women Fighting for Freedom Paperback – April 1, 2015 by Elana Maryles Sztokman ( Sourcebooks) 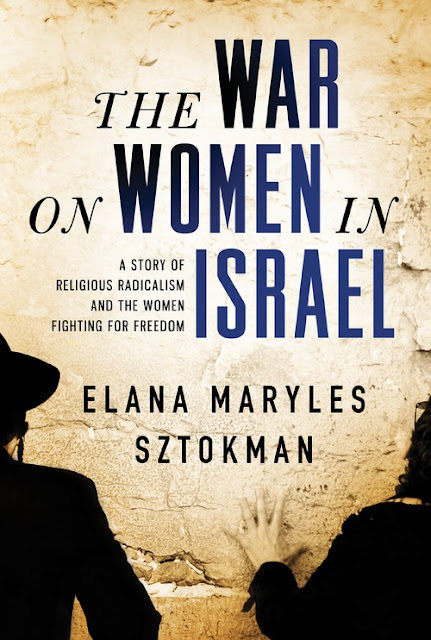 The War on Women in Israel: How Religious Radicalism is Smothering the Voice of a Nation by Elana Maryles Sztokman

When I began reading this book, I was truly hoping that I wouldn't be learning anything new. I thought I was fully aware of how the Ultra-Orthodox (Haredi) parties manipulated the governments they've sat in coalitions with. I thought I already grasped the significance of their dealings and wielding of their disproportionate power, which crept into almost every area our lives. After all, I've lived here for over 35 years, and I don't shy away from the news. In fact, I did know quite a lot, mostly because I've been involved with some of the organizations and people fighting to overcome these inequities. However, Sztokman's book made me realize that even I had some gaps in my knowledge of just how dire the situation has become.

ACROSS ISRAEL-one of the world's most democratic countries-women are being threatened and abused as ultra-Orthodox Jewish factions seek to suppress them. In this stunning exposé, award-winning author and leading Jewish women's activist Elana Sztokman reveals the struggles of Israeli women against this increasing oppression, from segregation on public buses-in a move Hillary Clinton called "reminiscent of Rosa Parks"-to being silenced in schools and erased from newspapers and ads. This alarming patriarchal backlash isn't limited to Israel either: its repercussions endanger the rights and freedoms of women from Afghanistan to America.

But there's hope as well: courageous feminist activists within the Orthodox world are starting to demand systemic change on these fronts, and, with some support from non-Orthodox advocates, they're creating positive reforms that could help women everywhere.

Blending interviews with original investigative research and historical context, Sztokman traces the evolution of this struggle against oppression and proposes solutions for creating a different, more egalitarian vision of religious culture and opportunity in Israeli society and around the world.

Fearless and inspiring, The War on Women in Israel brings to light a major social and international issue and offers a rousing call to action to stop the repression of women in Israel and worldwide.
Posted by Unknown at 12:44 PM