THE MEDICI Power, Money, and Ambition in the Italian Renaissance by Paul Strathern (Pegasus Books) 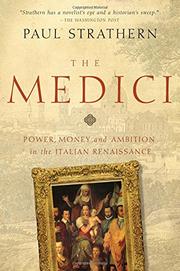 The prolific author continues to do what he does best—bring history to wondrous life—with this thorough history of the Medici family, the stimulus and backbone of the Renaissance.

Strathern (Death in Florence: The Medici, Savonarola, and the Battle for the Soul of a Renaissance City, 2015, etc.) begins this bright, novelistic history with the 14th-century banker Giovanni di Bicci, who laid the groundwork for his family’s wealth. The Italians invented banking and double-entry bookkeeping, and to avoid accusations of usury, Giovanni charged only a percentage for “risk.” Eschewing politics, he concentrated on building wealth. It was his son Cosimo who took advantage of the erudite refugees from the fall of Constantinople to promote ancient Greek and Roman writings. He supported the arts and began dominating Florentine politics. Cosimo ruled without appearing to rule, with the family always supporting the working class. In addition to economics lessons, Strathern provides wonderful thumbnail sketches of the great artists and writers of the time. One of the Medici’s best moves was supporting the papal candidates, realizing that having the popes’ backing, as well as their lucrative banking, would provide strength. Through unrest, church schisms, invasion by the Holy Roman Empire and France, the Medici flourished, none more so than the flamboyant Lorenzo. This was the time of Savonarola, the fiery anti-humanist, but also Botticelli, Brunelleschi, and Machiavelli. The strength of the Medici continued with the papacies of Leo X and Clement VII. The author dubs the Medici godfathers to the Renaissance, but it was Clement’s dawdling over the divorce of England’s Henry VIII that unwittingly led to the final break with the church and the Reformation. The ladies of the family played their own parts, with Catherine de Medici dominating the Valois of France, followed to the throne by her cousin Marie.

A fantastically comprehensive history covering the breadth of the great learning, art, politics, and religion of the period.
Posted by Unknown at 5:28 AM