A Child of Books is published by Walker Books. The illustrated edition of John Boyne’s The Boy in the Striped Pyjamas will be published 6 October by Penguin Random House.

A Child of Books is published by Walker Books. The illustrated edition of John Boyne’s The Boy in the Striped Pyjamas will be published 6 October by Penguin Random House.

Oliver Jeffers: 'I was always an artist' – but not a child of books


The title of the children’s illustrator’s latest volume, A Child of Books, does not apply to the artist himself, who says his career was ‘very much an accident’ 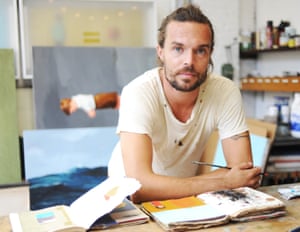 Oliver Jeffers’s latest book is called A Child of Books. The illustrator and writer’s collaboration with fellow artist and typographer Sam Winston follows a young girl who makes a world for herself – and a young boy she meets – out of stories.

So I ask him: was he a child of books? No, he tells me in his sunny, clean Brooklyn studio, with hints of both embarrassment and pride in his voice: “I was much more interested in going out in the street and playing and kind of getting into mischief.”

Jeffers attributes this taste for mischief to his upbringing in Belfast; born in Australia, he was later raised in Northern Ireland with a healthy disrespect for authority. Any discipline he had was always devoted to his drawing. “I think I was always an artist,” he says. 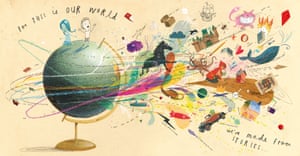 The world agreed from the beginning: How to Catch a Star, his first book, was published in 2004 to floods of acclaim, sales, and awards nominations. The Incredible Book Eating Boy, published in 2006, went on to win the Irish children’s book award. He has worked steadily on children’s books ever since; the tale of a boy and his penguin in Lost and Found, the touching story of loss in The Heart in the Bottle, the charming story of workplace protest The Day the Crayons Quit. Even A Child of Books, barely out a month, is already a bestseller, with Jeffers’s illustrated version of John Boyne’s The Boy in Striped Pyjamas coming in October too. 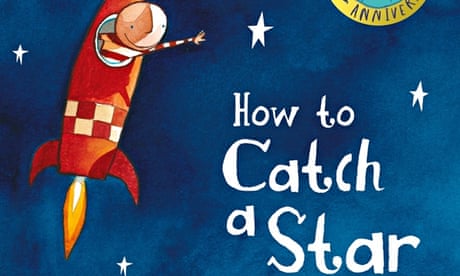 Oliver Jeffers: How I made How to Catch a Star – in pictures

Describing Jeffers’s art style is naturally difficult, in a dancing-about-architecture sort of way. His figures might appear, at first, roughly hewn in their simplicity. The little girl who takes the reader through A Child of Books wears an uncomplicated sailor’s pinafore, and her plaited hair is only lightly sketched out with a few lines. In all his books, images are accompanied by Jeffers’s distinctive handwriting: deceptively awkward-looking, like the work of a schoolboy whose natural chicken-scratch hand is being forced into grammar-school cursive, though the capitalization of key words makes it clear how deliberately Jeffers composes the words alongside the image. The effect of it all is exceptionally inviting, to children and adults alike.

Jeffers says he did not set out to become a children’s book writer and illustrator – not at all. “The kids’ books came very much as an accident,” he says; his ambitions had always been in fine arts. But when he formulated the idea, all the way back in art school at the University of Ulster, for How to Catch a Star, the children’s book form simply fit his aims.

Now he finds himself with such a long, successful track record in the form that people might believe he is “only” a children’s illustrator, a designation that does not particularly seem to bother him. “I didn’t really test my books on kids,” he said. “They weren’t really made with an idea of what a contemporary audience of children might want to hear, but they were more to satisfy my own sense of curiosity.” It was pure luck that the Venn diagram had a lot of overlap.


He continues to work in fine art, which he says people in the publishing world find odd, and vice versa. “I used to care a lot about how that was perceived and then I think about a decade ago, I just stopped,” Jeffers says. “It is what it is.”

The energy he used to spend worrying about it has been refocused into simply producing work that interests him. Taking me to the back of his studio, set up as a kind of mini-gallery, he shows me a series of canvases he has painted for a newexhibition at the Bryce Wolkowitz gallery in New York. They’re seascapes. Though they look a little different from his children’s illustrations, that trademark handwriting is there, too. He’s painted numbers on the canvas, each of them intended to show the depth of the sea. They do add something essential to the image that might otherwise go unnoticed.

Including this sort of information with a visual image is a preoccupation of his. “I started putting words on these images at a really early point because I just thought that it was a cool graphic device and you could do interesting things by complimenting or contrasting what the image was showing,” he says. “By doing that, you could effectively create a completely different meaning, piece of work, all together, a completely different story.” 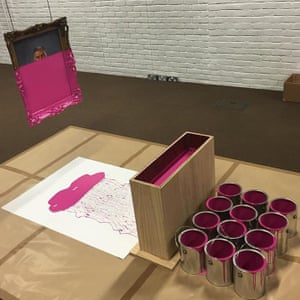 Another of Jeffers’s “adult” projects is a series of dipped paintings; he finds subjects, interviews them extensively, then paints their portrait – only to dip half the image in a bucket of paint so it is lost forever. The ambiguity of an image that can only be remembered, not seen, intrigues him: “The first one that I dipped, I just accidentally forgot to take a photograph of it before I put it in because I was so distracted with the mechanics of how to make the box and how much paint to put in. Loads of people asked: did I really paint the whole thing?”

I ask him how he balances all this work – seeing his studio in person, this is a truly staggering amount of productivity – with his life. He smiles and says he’s getting better, even though he spent his last Christmas vacation working on The Boy in the Striped Pyjamas. “I was literally researching images of Auschwitz. It was grim, but possibly, with hindsight, that might not have been a bad mindset to be in when actually doing this, because there’s a grimness that sort of gets funnelled in through the work.” Photograph: Penguin Random House 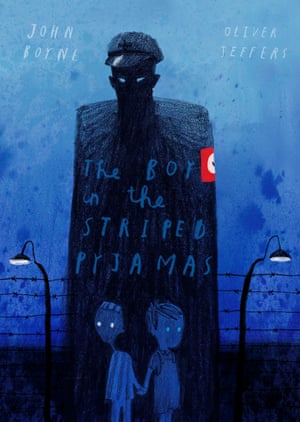 Jeffers has worked with Boyne before, illustrating his children’s novel Noah Barleywater Runs Away. But this project was different: in the illustrations Jeffers shows me, the colour palette is very simple, only red and blue and black line drawings. He kept the facial features down to a minimum, particularly in one image of Hitler and Eva Braun. “I was really pleased with how this came out,” he says and thinks about that a moment. “Pleased is a weird word.”

But he is right. The images are beautiful in the right way, honouring the subject without making it sentimental and erasing its humanity.

Jeffers is, you could say, now more of a man of books, and he tells me that although his one-year-old son is like him – not quite a book addict yet – there are hints that the passion has passed on to the next generation. “Last night before bath time, he was walking around upstairs, buck naked with a book,” Jeffers says. “Just sort of speaking gibberish, but with a book that was upside down. I just thought it was the most adorable thing.”

A Child of Books is published by Walker Books. The illustrated edition of John Boyne’s The Boy in the Striped Pyjamas will be published 6 October by Penguin Random House.
Posted by Unknown at 5:59 AM