Rhapsody in Schmaltz: Yiddish Food and why We Can’t Stop Eating It by Michael Wex , St Martins Press

Rhapsody in Schmaltz: Yiddish Food and why We Can’t Stop Eating It by Michael Wex , St Martins Press

In ‘Rhapsody in Schmaltz,’ Michael Wex delves into Ashkenazi Jewish cuisine and the stories behind classic dishes—from kugel to cholent to brain latkes. (Yes, brain latkes.)

Michael Wex is not a chef. He’s not a lifelong challah baker, an avid cookbook collector, or even, by his own admission, much of a home cook. But his new book,Rhapsody in Schmaltz: Yiddish Food and Why We Can’t Stop Eating It, might just be the most important Jewish food book published this year.


As a novelist and author of Born to Kvetch, a New York Times best-selling book on Yiddish language and culture, Wex has established himself as one of the field’s few public intellectuals—the Malcolm Gladwell of the Yiddish world, minus thecontroversy. In Rhapsody in Schmaltz, he turns his attention to food, specifically the nostalgic brand of cooking served forth from the hardscrabble kitchens of Eastern Europe.


Wex covers all the bases, devoting a chapter to the sacred triumvirate of Yiddish cooking (garlic, onions, and schmaltz) and another to the centerpiece and primary gut bomb of the traditional Shabbat table, cholent. Cholent, he writes, is “ground zero—the big bang, if you ask those who eat it—of East European Jewish food, the primal ooze form which many of the best-known, most characteristic Yiddish dishes emerged.”


With a delicate mix of scholarship, insight, and humor, Wex addresses the borderline masochistic relationship Ashkenazi Jews have with their cuisine, and the overwhelming nostalgia that, despite the indigestion, keeps us coming back for more. He also digs up curious and fascinating tidbits, like the fact that for centuries,pashtet (meat pies encased in dough) and cow udder (rendered kosher if the remaining milk inside was drained out) were part of a typical Jewish menu. This is not a book about the nouveau, artisanally enhanced Ashkenazi cuisine that is currently enjoying a cultural renaissance. But it is a book that everyone interested in that cuisine should familiarize themselves with.


Wex, 61, grew up in Alberta, Canada, in an Orthodox family that spoke both Yiddish and English at home. Later in life he shed his religious observance and went to graduate school for literature, concentrating on Old and Middle English, Old Norse, and German philology. A career in anything Jewish or Yiddish was not on the agenda. But when he was in his early 30s, an advertisement for a klezmer concert playing in Toronto piqued his interest. “My family had been disconnected from the world of secular Yiddish culture,” he said. “I had no exposure to The Workmen’s Circle and all of that organized stuff.”


Before long, he tapped into the then-budding klezmer revival movement. A musician friend told him about KlezKamp, a (recently discontinued) annual festival for Yiddish and klezmer music that launched in 1984. It was something of a revelation. “These were people roughly my age who were playing real klezmer music. Not always particularly well, but actually doing it.” Wex realized that with his background as a native Yiddish speaker and his interest in studying language, he had something to add to the conversation. “The first year I went as a paying customer, not knowing anyone,” he said. “I walked out with a career.” Flash forward three decades and he still has it.


Recently, I spoke with Wex to find out why he was keen on writing a book about food. It turns out, he wasn’t. But his methodical and humorous-without-falling-back-on-kitsch approach to the subject—and his ability to seamlessly weave between Maimonides, Crisco, and The Big Bang Theory, and reference Caroline Kennedy and a carrot tsimmes in the same sentence—makes me glad he did it anyway.
***
What was your inspiration for writing a book about food?
Honestly, it was my agent who first suggested it. At first I was not all that keen on the idea, because food wasn’t my area of expertise. I asked a few other people who I thought might do a better job if they would be interested. But when I couldn’t pawn it off on someone, I began to think about how I might approach it. I started from the idea that, unlike almost all other cuisines, Jewish food is determined by religious demands that might not have anything to do with geography. When it comes to Ashkenazi food, there is a kind of uniformity that stretches across a large continent, and that has to do with religious underpinnings.


You mean like kashrut.
Yes, kashrut is crucial and not just for the avoidance of pork, which was the main meat in Ashkenazi areas of Europe. There are other aspects, like the prohibition against eating an animal’s sciatic nerve. You can remove it, a practice that is more common in Sephardic communities, but it is very labor intensive and expensive. It renders the back part of the cow, which is considered to be the tastier end, essentially off limits. Kosher beef is confined to the tougher front cuts like the iconic brisket. These are cuts that benefit from a long, slow cooking in some kind of liquid. So, that is an example of how a religious prohibition determines what people eat and how they cook it.


You write in the book that “Saturday is the most important ingredient to Ashkenazi cuisine.” Can you explain that?
Except for the delicatessen, which is a category unto itself, all of the significant Ashkenazi dishes have a connection with Shabbat or the various holidays. Many of them tie back to cholent, the slow-simmered, generally legume-based stew eaten on Shabbat. Kugel, kishke, and so many other emblematic Jewish foods quite literally come out of the cholent pot. The stand-alone kugel is relatively recent. Before that, kugel was cooked in a special pot that was submerged in the cholent as it simmered. These are foods that have to be able to sit over a slow flame for almost the entirety of Shabbat, so you end up with a lot of very brown, soft foods.


Yeah, Ashkenazi cuisine isn’t exactly known for its freshness and crunch.
I remember my parents making fun of how nobody ate fresh vegetables in the old country. The old timers didn’t understand why anyone would eat a raw carrot—that was for horses. One of the Yiddish cookbooks I came across actually stated that human beings were not meant to eat raw vegetables. Reading that explained so much to me—they are actually doing this on purpose! One exception was radishes, which were commonly dipped in schmaltz. But as far as green vegetables go, they tended to avoid them.
With all the focus on Shabbat and holidays, is it fair to say that Yiddish cuisine isn’t really a weekday cuisine?
The rest of the cuisine was largely indistinguishable from the day-to-day foods eaten in each given country. There is an inexplicable popularity of onions and garlic in Jewish cuisine that traces back to the Talmud. Other than that, once you subtract lard and pork products, Jewish food looks like what was eaten around it. For example, Lithuanian Jewish weekday cuisine was heavy on dairy because Lithuanian cuisine is generally heavy on dairy.
People often get nostalgic about how amazing Jewish food is, but with all the indigestion and heaviness associated with it, our relationship with this cuisine can actually be borderline abusive. Can you talk about the line between pleasure and pain with Jewish food?
A lot of the rhapsodizing comes from people who don’t actually eat Jewish food very often. For the most part, though, the actual level of traditional Jewish cooking was quite low. And so much of it was stereotyped. It’s Shabbat so you have to have chicken, or you have to have kugel. After a while it becomes so rote. If Shabbat happened once a year, most Jews would keep it, but it is every damn week. You sit around singing songs about how great it is. It is like you have to convince yourself you’re enjoying it.


So, why do people love the food so much?
That was one of my big questions with this book. I wanted to figure out why people attach such an aura to a cuisine that is not haute by any stretch of the imagination. You can raise grave questions about its health benefits, and yet it has retained something that makes people go on eating it. With gefilte fish, for example, most American Jews know the stuff from the supermarket and it doesn’t taste good. Relatively few people have had real homemade or artisan versions. But yet it has a status that even if you don’t like it, it has to be on your holiday table. It wouldn’t feel right if it wasn’t there to complain about.
A lot of Jewish food’s appeal, I have found, has more to do with fond memories of growing up than the food itself. Your early sensations are the ones that stay with you. You similarly always remember your first kiss. Technically speaking it probably wasn’t your best kiss, but it is the one that gave you the taste.


Also, as a person’s religious observance declines, these emblematic foods tend to take on more meaning. They become the expression of who or what someone is as a Jew. Eating them is an outward symbol and a way of affirming something about yourself. The food becomes the stand-in for so much of the other stuff. 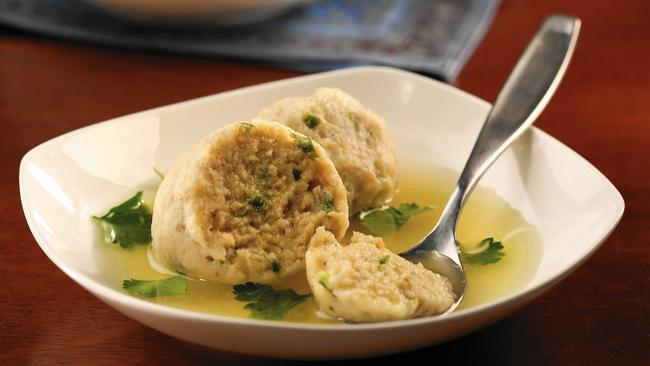 What surprised you most while working on this book?
Two things. The first is the prevalence of jellies and aspics in earlier Ashkenazi cooking. They were once considered a standard part of Jewish cuisine, but all we have now is the gel in the gefilte fish jars and ptcha. Growing up in the 1950s and ’60s, I always thought Jell-O was the most goyish thing on two feet. But it actually has a Jewish history, we just didn’t know that. The other thing that amazed me was the pashtet, or meat pies encased in pastry dough. Up until the 16th and 17th century, they were the main Shabbat dish, but you don’t really see them anymore.


Were there any foods you purposefully left out of your book?
I left out a lot of the fish, mostly because they weren’t Jewish in the sense I was talking about in the book. A lot of the smoked fish that we think of as Jewish, like belly lox, wasn’t particularly Jewish before Jews settled in America and caught on to them. I remember asking my parents if they saw it in the old country and they said, “Absolutely not.”
I also attempted not to write about any food that I hadn’t personally tried. I failed on the meat pies because I could not find any 16th-century recipes. I was really amazed by the recipes I found for brain latkes, but they are impossible to get now.
Why did you specify “Yiddish” food on your cover instead of Jewish food?


The Jewish community is a lot more pluralistic today than it was at one time. I wanted to make it clear from the beginning that I was not going to be talking about falafel or shakshuka, or any of that stuff. Forty years ago you would never see hummus in an Ashkenazi cookbook—now it would unusual not to find it. Putting the word “Yiddish” on the cover separated what I was trying to accomplish.


What would be your last Yiddish meal?
I’d go for the three courses of kugel. I’d start with a nice flanken with Polish lokshenkugel with raisins and lots of sugar. And then I’d have potato kugel followed by Yerushalmi kugel. And maybe, if a boiled chicken should magically fall from heaven, even a litvishe kugel, with lots of salt and pepper. That and brain latkes, which I’m still dying to try.