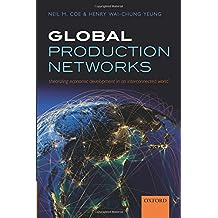 It is commonly asserted that a third or more of world trade is between corporations, and a further third is within their global supply chains (intra-firm trade), suggesting the majority of economic activity in the international realm is overseen by corporations. Nevertheless, the analysis of the global corporation as a governing authority over these myriad economic relations – most obviously the management of its supply chains, including its authority over the network of affiliates, partners and subsidiaries – is relatively under-developed in Global Political Economy. The book reviewed here goes some way to addressing this relative lacuna.
The global production networks that are the subject of Coe and Yeung’s analysis are governed by global corporations, sometimes singularly, sometimes collectively in ways that are directly analogous to the more ‘normal’ institutions of global governance (see my blog for Progress in Political Economy. While the authors may not completely subscribe to such a perspective, their new study offers some interesting evidence as to why such a (global) governance derived analysis would have some salience, but also illustrates the shortcomings of current economistic approaches.
At the centre of their project is a critique of what they refer to as the established Global Production Network (GPN) perspective, or in their terms GPN 1.0; their alternative is a more ‘dynamic’ GPN 2.0. While the former approach seeks to map these networks through a consideration of how value is created, enhanced and captured, how corporate and institutional power shape these networks, and how embedded they are in local, regional and wider economic contexts, Coe and Yeung argue that such an approach is essentially static offering no dynamic account of why these networks are formed. Image Credit: Bluedawe. Wikipedia. CC-BY-SA 3.0.
To this end, they seek to incorporate an account of ‘structural capitalist dynamics’ and market imperatives, to expand the analysis of the territorially expressed solutions corporations adopt. These ‘territorial fixes’ have important impacts on the interaction with states and other organisations pushing for specific aspects of regional (location specific) economic development. However, the book self-avowedly offers an analytical and theoretical development rather than an account of particular networks and their political economy, although the final chapter concludes with some high-level policy advice.
By focussing on value creation, enhancement and capture in these networks, the authors seek to distance themselves from the logic of GPN 1.0, which in their account is far to production focussed, leaving service-driven networks under analysed. This prompts a much more complex appreciation of the shape and interactivity of the networks they are exploring, with the networked firms joined by extra-firm actors (ranging from the state to consumers and civil society groups), and intermediaries (which stretches from logistic providers and financial services to standards). In this third element (intermediaries) the authors’ engagement with actor network theory surfaces as they explore how both human and non-human elements of networks can contribute to network developmental trajectories.
For Coe and Yeung it is the manner in which firms/corporations and other actors negotiate their ‘enrolment’ into these networks that can reveal how the intra-network power relations will play out. Here, their approach starts to recognise the manner in which structural power analyses and insights from critical global governance approaches might inform their account of GPN 2.0, but this remains suggestive rather than developed in a significant manner, with the main defining power dynamic still being that which is driven by economic imperatives. The account of the dynamics driving network formation and development therefore is focussed on issues of cost, efficiency and risk management. Thus, while the latter starts to explore non-economic drivers, the model of corporate behaviour still maintains a privileged space for economic issues, making no real attempt to account for non-economic drivers of network building. Despite having an admirably agent centred focus, unfortunately the analysis management incentives remains largely limited to the economic.
Let me be clear I am not arguing that this is wholly mistaken, but rather it is partial and especially noteworthy as much of the preceding analysis would seem to have opened up a space for the inclusion of a significant range of non-economically defined causal elements. This results in the account of the diverse range of strategies that pattern engagement with global production networks still being focussed on the manner in which differing strategic choices and trajectories are driven by the authors’ notion of the cost-capability ratio, market imperatives and financial discipline.
To be fair, the ‘cost-capability ratio’ is more complex than merely a focus on cost, including the manner in which cost is relative to the capabilities delivered in a specific network relation and how these capabilities feed into the optimisation of the network. However, this remains largely rooted in economic considerations of efficiency, optimal costing and financial management, lacking a fuller account of the non-economic aspects (managerial desire for an expansion of the scope of control, for instance) that one might seek from a political economic analysis.
Despite these shortcomings the authors develop a nuanced and interesting account of the centrality of value capture to regional economic development strategies, that moves well beyond the rather one dimensional ‘up-grading’ approach that dominates the literature on supply chain enrolment and its benefits for developing countries. Here, enrolment itself is disaggregated to demonstrate the different trajectories that firms may engage with global production networks, while also expressly exploring the uneven and discontinuous effects of such engagement.
Overall, then, this is a well-developed argument that while perhaps not going far enough in its interest in expansion of drivers global production network development, represents a worthwhile progression from much of the more static analysis the authors themselves critique. Given their oft alluded to debt to Peter Dicken (of Global Shift fame), perhaps Coe and Yeung’s next project will be to take this set of analyses and develop some thick and detailed (historical) accounts of actual global production networks; if so I look forward to reading that volume. For now this remains a useful step towards a more fully political economic analysis of these global production networks and as such will be of some interest to anyone trying to make sense of global corporate practices.
Posted by Unknown at 5:52 AM