Against Everything by Mark Greif review – hipsters and how to live

These essays on life in the 21st century, which range from Occupy to fitness, are coolly stylish and drily funny 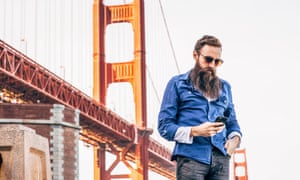 The essay “What was the hipster?” is a withering critique of “tight-knit colonies of similar-looking, slouching people” … a hipster in San Francisco. Photograph: Cultura/Rex Shutterstock

When he was a child, Mark Greif’s mother used to take him to swim at Walden Pond, near his home in Concord, Massachusetts. Walden is closely associated with Henry David Thoreau, the transcendentalist writer who lived there in a shack for two years, writing a classic work about his experience. Although neither Greif nor his mother had yet read Thoreau, they were aware of some phrases of his, having seen quotations on mugs, bumper stickers and T-shirts. On the way to and from the pond by car, Greif’s mother wondered aloud what Thoreau would have made of the roadside banalities of contemporary existence: the advertising hoardings, the shopping malls, the vast mansions. “It was my task to do the wondering,” he recalls.

This early acquaintance with Thoreau led Greif to believe philosophy to be “against everything, if it was corrupt, dubious, enervating, untrue to us, false to happiness”. And, in Against Everything, he’s fittingly uncompromising. Greif’s collection of essays is full of surprises, not least that it is, at least in part, concerned with that old fashioned question of how to live. “It’s a book of critique of things I do,” he writes in the preface. But instead of being the kind of self-help book that tells you “how to do the things you are supposed to do, but better,” it “asks about those things you are supposed to do”.

But this doesn’t capture everything Greif is up to in this politically engaged, coolly stylish and often drily funny book. Over the course of the essays – which were first published in n+1, the journal he co-founded in 2004 – he covers the significance of exercise, our relationship with food, the meaning of hip-hop music, Radiohead, the figure of the hipster, society’s sexualisation of children, and war. Although he’s vexed, even depressed, by many aspects of contemporary culture he analyses, he stops short of pessimism, and the essays rarely conclude without opening at least some minute window of possibility. Greif doesn’t tell you everything is great – far from it – but rather than merely sketch the bars of the prison he seems deeply concerned with how it can be escaped.


He begins in the gym, a location that, to Greif, “resembles a voluntary hospital”, where we willingly undergo self-administered treatment with the aim of improving our health. It’s also a place where formerly private activities are now carried out in public – there’s a degree of performance involved in attending. The gym is, in Greif’s estimation, a quintessentially post-industrial location where we re-enact the repetitive motions once required of us by industrial labour. “Nothing can make you believe we harbour nostalgia for factory work but a modern gym,” he writes – its pulleys, cables and bars appear to him miniature versions of factory machinery. In the process of exercising we become more aware of our own bodies as mechanisms to be fine-tuned: exercise, he writes, “makes you acknowledge the machine operating inside yourself”.

It is also an effort to confer superiority – of longevity and of sex appeal – and he returns to this quest for youth and attractiveness in the queasily but fittingly titled essay “Afternoon of the Sex Children”. Society’s obsession with sex and youth is problematically embodied in what he calls the “sex child”, a mythical image of youth and sexual freedom born from the “lure of permanent childhood” that pervades the culture of adults. Childhood, glimpsed in the rear-view mirror of adult nostalgia, appears a utopian zone of complete freedom, and the desire for a permanent childhood is in some measure a result of the “overwhelming feeling that one hasn’t achieved one’s true youth”.

By learning to rap, Greif plays on the white liberal’s guilt at cultural appropriation

The problem, he writes, is that sex and youth are zones of competition easily marketed to people – all you have to do is to tell them that they’re having the wrong kind of sex and that they’re not as young as they used to be to stir up a sense of opportunities lost. Greif suggests that, instead, we should value “age and accomplishment, not emptiness and newness”.

The unflinching intelligence of his writing can be exhilarating, but intimidating. Yet there are many moments of levity: a doctor is described as “a mechanic who wears the white robe of an angel and is as arrogant as a boss”. Of the hipster movement he writes: “It did not yield a great literature, but made good use of fonts”.

As the book progresses, the style becomes looser and more expansive. The cool, stern tone of the earlier essays gives way to a more playful approach, typified by the essay “Learning to Rap”, in which, yes, Greif decides to teach himself how to rap along to hip-hop records. His rationale is that, as a music fan in the early 90s, he chose to devote himself to American post-punk, such as Sonic Youth and Fugazi, rather than hip-hop. This was a mistake, he now thinks, as hip-hop was the birth of a “new world-historical form” while rock “had been basically exhausted by 1972”.

It’s quite the essay. By wrestling with the specifics of learning to rap, Grief plays on the white liberal’s guilt at cultural appropriation while demonstrating the complexity, difficulty and brilliance of the form. He discusses the practical challenges: trying to decipher the lyrics of Nas, Snoop Dogg and the Notorious BIG; rapping along in a low voice with the music on his headphones as he waits for the next subway. He wrestles with what to do when a song includes the word “nigga”. Sometimes, if he’s rapping in public, he substitutes “brother”, he says, often covering his mouth with his hand. He’s awake to the humour of the setup. “This is embarrassing and shameful, but so is a white person, nearing middle age, rapping.”

Greif’s essay “What was the hipster?” is a withering critique of “tight-knit colonies of similar-looking, slouching people”. Hipsterism isn’t anti-authoritarian but rather “opens up a poisonous conduit” between rebel subculture and the dominant class. He gives a potted history of the contemporary hipster while noting its mutations, including the “hipster primitive”, a fusion of pastoral innocence with the dominant ironic mode of hipsterism. “It was not unheard of to find band members wearing masks or plush animal suits,” he notes.

Greif revisits Walden Pond in the final essay. By this point he has discussed his observations of police brutality (“a surprise of being around police is how much they touch you”) and his involvement with the Occupy Wall Street movement. He compares Liberty Square, the name OWS gave their temporary home of Zuccotti Park in lower Manhattan, “a tiny rectangle of unlovable paving”, to Walden, “a puddle in the grander scheme of things”. Each for a short while was a site of individual and collective possibility, and Greif’s incisive book is testament to their enduring influence.

• Against Everything is published by Verso.
Posted by Unknown at 6:53 AM